Run For The Paws In Hickman County, Tennessee

On August 7, 2010 the Centerville Public Square will be the place to be if you ride motorcycles. Registration for the Poker Run begins at 8:30 a.m. and continues until the start of the ride at 10:00 a.m. which ends at 5:00 p.m. in Lyles at the park.
The entrance fee is only $10.00 per bike and all proceeds go to the Hickman County Humane Society, which is an all volunteer organization. A $50 prize will be given to the rider with the best hand and a $25 prize will go to the person with the worst hand.
Barbecue meal tickets will be sold for $5 and will be served at the end of the run in Lyles.
For all your motorcycle event information, check out the website www.motorcyclemonster.comand enjoy the ride.
Posted by Paul at 10:28 AM No comments: 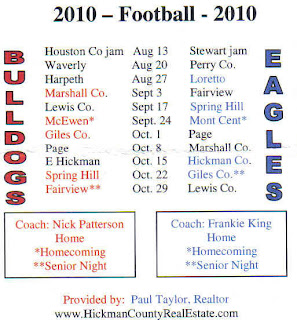 Here is the 2010 Football schedule for the Hickman County High School Bulldogs in Centerville and the East Hickman County High School Eagles in Lyles. Here is the legal info that I am required to give since I am a Realtor. I am a Realtor with Crye-Leike, Realtors in Fairview. Equal Housing Opportunity. You can reach me at home at (931) 670-5316 or at the office: (615) 799-6288.
Go Bulldogs. Go Eagles.
I love football and I hope that this is a good season. One of my neighbors is the coach for the Bulldogs and I would love to see him do well. I would also like to see the Eagles do well. I went to Elementary School at East Elementary and was proud to be an Eagle.
See you there at some of the Football Games. I'll be the one wearing Red and Blue.
Posted by Paul at 12:54 PM No comments: I will be glad when this election is over, although I don't know how much will change. I believe that in most cases, people think that their vote does not make much of a difference. However, I remember several years ago, when the school superintendent election was decided by only four votes. That position paid about $80,000 and now is near $100,000. However, now only a few members of the school board hire the person for the position.
One thing I am not going to tell you is who to vote for. I hope you vote for the person that you think will do the best job. I have my opinions and I am sure that you have yours. I know that in a small county such as Hickman County, people tend to vote for who they know and not necessarily the person that will do the best job. But remember, when you enter that booth, no one but you knows who you mark that block for.
Posted by Paul at 7:52 PM No comments:

I hope you like the title to this post. I don't know if you have noticed it or not, but it is election time in Hickman County Tennessee. And, signs are everywhere. Not too many years ago, I was one of the people that placed signs at every crossroad and yard that I could find. I believe that it is a necessary evil to remind voters who is running for what.
But, this year seems to me to be different. Perhaps there are more people running for offices than usual. There must be thousands of signs out there and they are getting bigger. That seems to me to be yelling. Sorta like using all caps when posting on Facebook or any website.
I don't know, but maybe the election will help to stimulate the local economy - the sign-makers anyway. Of course, I have also heard some complaints that many of the candidates haven't bought there signs locally, but have gone out of Hickman County to other counties to purchase their signs. To me, that is WRONG! How can you expect people to vote for you when you don't even support local businesses. Kinda like the manager of Vision 21 not even living in Hickman County. That is WRONG!
Anyway, GO VOTE!
Posted by Paul at 8:51 AM No comments:

This Is Not Good News For Hickman County

Just about everyone in Tennessee knows that Hickman County has been hit hard the past few years with high unemployment and low- paying jobs and has not recovered yet. According to Realtytrac.com, these high unemployment rates and low-paying jobs have taken a toll on the citizens of Hickman County. Hickman County has the third-highest foreclosure rate in the state of Tennessee. One out of every 359 houses received a foreclosure filing in May - twice the state average.
I don't want this blog to become a negative thing - although you need to hear the bad news with the good news. But, I believe that the people of Hickman County need to "sell" the idea that Hickman County is a great place to live and do business. I know that during this recession, it has been hard to attract new industry and business, but I don't think that much of an effort has been made.
Posted by Paul at 7:53 AM No comments: