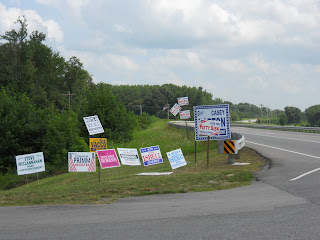 I will be glad when this election is over, although I don't know how much will change. I believe that in most cases, people think that their vote does not make much of a difference. However, I remember several years ago, when the school superintendent election was decided by only four votes. That position paid about $80,000 and now is near $100,000. However, now only a few members of the school board hire the person for the position.
One thing I am not going to tell you is who to vote for. I hope you vote for the person that you think will do the best job. I have my opinions and I am sure that you have yours. I know that in a small county such as Hickman County, people tend to vote for who they know and not necessarily the person that will do the best job. But remember, when you enter that booth, no one but you knows who you mark that block for.
Posted by Paul at 7:52 PM